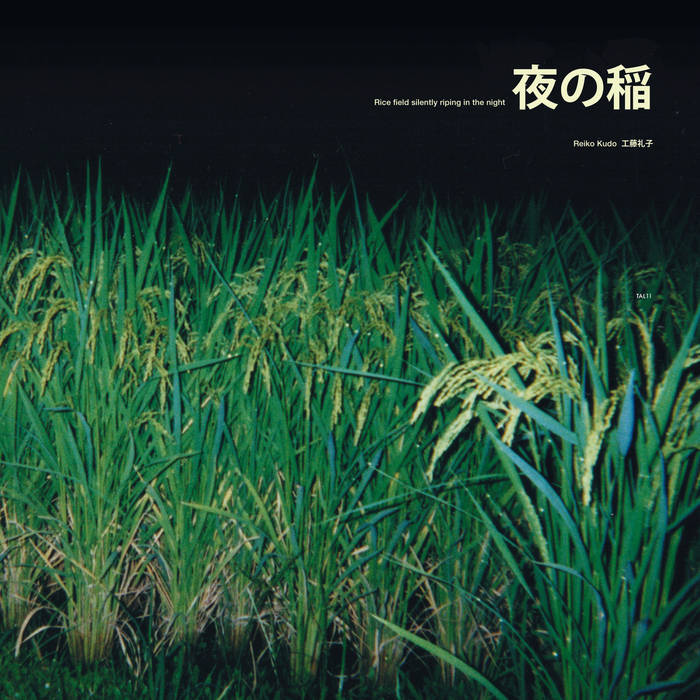 Reiko Kudo first debuted on the Tokyo underground music scene in 1980 with NOISE, a duo which apart from herself under her then maiden name Reiko Omura on voice, guitar and trumpet featured Tori Kudo on organ. Their only album TENNO (1980 on Engel) is probably one of the most outstanding and uncompromising records of all time.

Like other pioneering female producers from Japan such as NON (of NON BAND), PHEW and HACO, who had all begun their startling careers in the early days of the japanese Punk era, Reiko Kudo can surely be regarded as one of the most unique, uncategorisable and daring voices in the entire field of electronic and experimental music ever.

RICE FIELD SLOWLY RIPING IN THE NIGHT was REIKO KUDO's second album under her own name. It features TORI KUDO (MAHER SHALAL HASH BAZ) and SAYA and TAKASHI UENO (TENNISCOATS) on various instruments. The recordings took place in 2000 at Reiko' s and Tori's house in the rural surroundings of Shikoku island.

All recorded music on this album sounds like it originates in a parallel dimension where time and key signatures simply don't exist, Some might describe this as outsider music, but this doesn't really begin to do justice to the quality of the tracks, there is nothing accidental or forced here, this is simply music created in a very different way. Yet again REIKO KUDO had conceived of something utterly beautiful.

"After producing the album "Souvenir de mauve" with Maher Shalal Hash Baz which we released on our label Majikick, the idea came to us, to release Reiko Kudo's work. For Reiko's work, we brought our recording equipment from Tokyo to Shikoku and recorded the entire album at her house.

The piano was positioned in a room with a high ceiling. We would set up our small recording equipment in the room and started to record. The basic tracks were recorded without any rehearsal and just a few overdubs were added on top of it. To have a distant sound on the recording, Tori played trumpet in the next room. The choir was standing outside the house, singing "Enya-totto, enya-totto" through the open window. It was early spring, I remember that it was still a bit cold and the members of the choir were freezing outside.

Reiko plays only at certain times of the day, so that we were able to complete only two or three recordings a day. Therefore we had plenty of free time. We went to a hot spring, to a cafe, or we tried pottery on a spinning wheel at Tori's workshop. It was a very rewarding time.

When this album was finished, we brought it to her to listen to. She said happily "I think this is the best work I have ever done." We felt that all our efforts were richly rewarded. Secretly, we thought the same, so we are delighted that this album will be re-issued." - Saya and Ueno (Tenniscoats), Tokyo 2018

Bandcamp Daily  your guide to the world of Bandcamp

Featured sounds from Fly Lo and Ahmed Idris, plus Mother Nature hops on to drop off new project